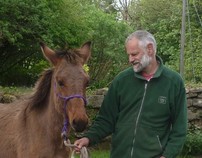 My view on horsemanship is this.

If we present ourself correctly to the horse then over time things will improve for both of us.

Once the relationship is set up nicely then ride him straight and in balance.

﻿These days I don’t do much work with the horses. Occasionally, if one of them starts getting a bit pushy I might take him in the school and spend a bit of time with him. I won’t do much really - just let him check out the boundaries that I have set up, and ask him to move about a bit. I know here my wife would say, ‘what you are saying there is no help to anyone - it’s so general no-one will know what you are on about’. So I’ll explain it a bit more, just for her - not because she needs to know it - she does the same as me anyway - but because it annoys her when I talk in riddles.

So why do I get so cross about new age horse-trainer-speak? I’ll tell you why. Because I think it has misled a whole load of people and the side-effect of that is a whole load of unhappy horses. You know, what horses want is so so simple, but it has got so buried under a load of potentially pretty misleading theory. So why have we all been so keen to get involved in all this stuff - you know, obsessed with horses’ thoughts, and giving horses a choice, and setting up partnerships with horses, making it the horses idea, and on and on and on the list goes.

It all got sold to us on the back of some pretty bad horsemanship that was around in the 1980/90s. As it happens, I reckon bad horsemanship has always been around and probably always will be. But anyway, around that time there were a bunch of people who wanted to do things a better way and actually they were doing just that too. But the problem was that the way that it got explained and the language that was used to explain it was all a little bit open to interpretation. Those theories and that language was, over the years, taken up by other trainers, and with a bit of spin, and a bit of marketing, it has been sold to us in various mutations ever since.

I often watch people working with horses, and sometimes, even though they seem to be doing all the right things, those things aren’t working for them. That puzzled me for a while, but then I worked it out. Whatever it is that you do with the horse, to make it work you have to understand the true relationship that you need to have with the horse. If he can feel that coming from you, then everything works out for him so much better.

In the end I realised that it’s not what you do that makes a horse happy, it’s do you understand how you need to be.

Let’s just go back to that practical stuff again.

How does a horse feel a boundary - behind the softness has to be firmness. That is the boundary. But don’t go pulling the horse around - let him find the boundary, then he will know.

How does your horse know that you control the movement. I know it sounds simplistic but the fact is he works that out if you do control it, and he also works it out if you don’t.

I was sitting having supper with a few people the other day and, as it does around here, the conversation turned to horses. I have got a little bit out of the way of those conversations over the last couple of years - truth be told I'm beginning to feel like it's all been said. Anyway, it was quite interesting listening - a couple of people discussing their take on how things should be, you know, how you should ride the horse, and who is good and who is not, usual kind of stuff.

I know that's all pretty important and that the way I have described the situation there sounds a little trite, but for me there's something else more important that comes before all that. And this is the unspoken subject concerning the truth of the relationship between man and the horse.

Something happened at that dinner table that really said it all for me. There, in a nutshell was the evidence of what I think is one of the biggest problems that the modern world gives the horse to deal with.

The guys were talking about this trainer and that trainer, and I just said, 'well, surely from the horse's point of view, it's easier for him if he knows that when you say, Go over there, he just knows that that is what he has to do'. That's all I said.

The next comment was, 'That sounds really heavy', and then the next person around the table started telling a story about 'really heavy trainers' and how, since the Dorrances it didn't have to be like that. And I was thinking, 'that's about the standard reaction that I always get, right there'.

So why is all this significant, and so significant that I am moved to write about it. It's because what I said, well, I think it's true. Not only is it better for the horse, it's safer for everyone, and who is there on this planet who wants their horse to be any other way. That's the point of having a horse isn't it, so that he can take you where you want to go. But all that didn't even get thought about. The mists came down and suddenly the conversation was all about people that could make horses do things as if by magic, and this special trainer and that special trainer. And all I could think of was the poor horse just wishing someone would take control and be in charge. But we're not supposed to say that are we!

PS I bet the Dorrance's horses went where they were told to go. You can do it without being heavy you know, but even if you are heavy to get what you want, I reckon there is still a case that the horse could make, saying that he personally prefers to know the deal.